Where the vacation is just as important as the run: the Curaçao marathon

When spring break and marathons collide. My tropical island marathon experience in the 2019 KLM Curaçao marathon.

As part of my 7 continent journey, I needed to find a marathon in South America. I knew I wanted to do a marathon in the fall of 2019, and after evaluating a few different options, I settled on the KLM Curaçao marathon. To be honest, I had never heard of Curaçao (besides the alcohol). For others that also may be unaware, It's a Dutch-owned territory that's part of the ABC islands off the coast of Venezuela (near Aruba).
‍
The race takes place in late November, though I don't think that has a huge impact on temperature or climate. I think it's pretty warm and humid there no matter what time of year. My race coincided with the opening of a brand new Marriott hotel on the beach. The hotel officially opened 3 days before I arrived! The race was sponsored by KLM and Marriott so there were strong vibes of tourism and vacations. The course had been changed for this year to make the start and finish lines in the Marriott hotel lobby entrance. 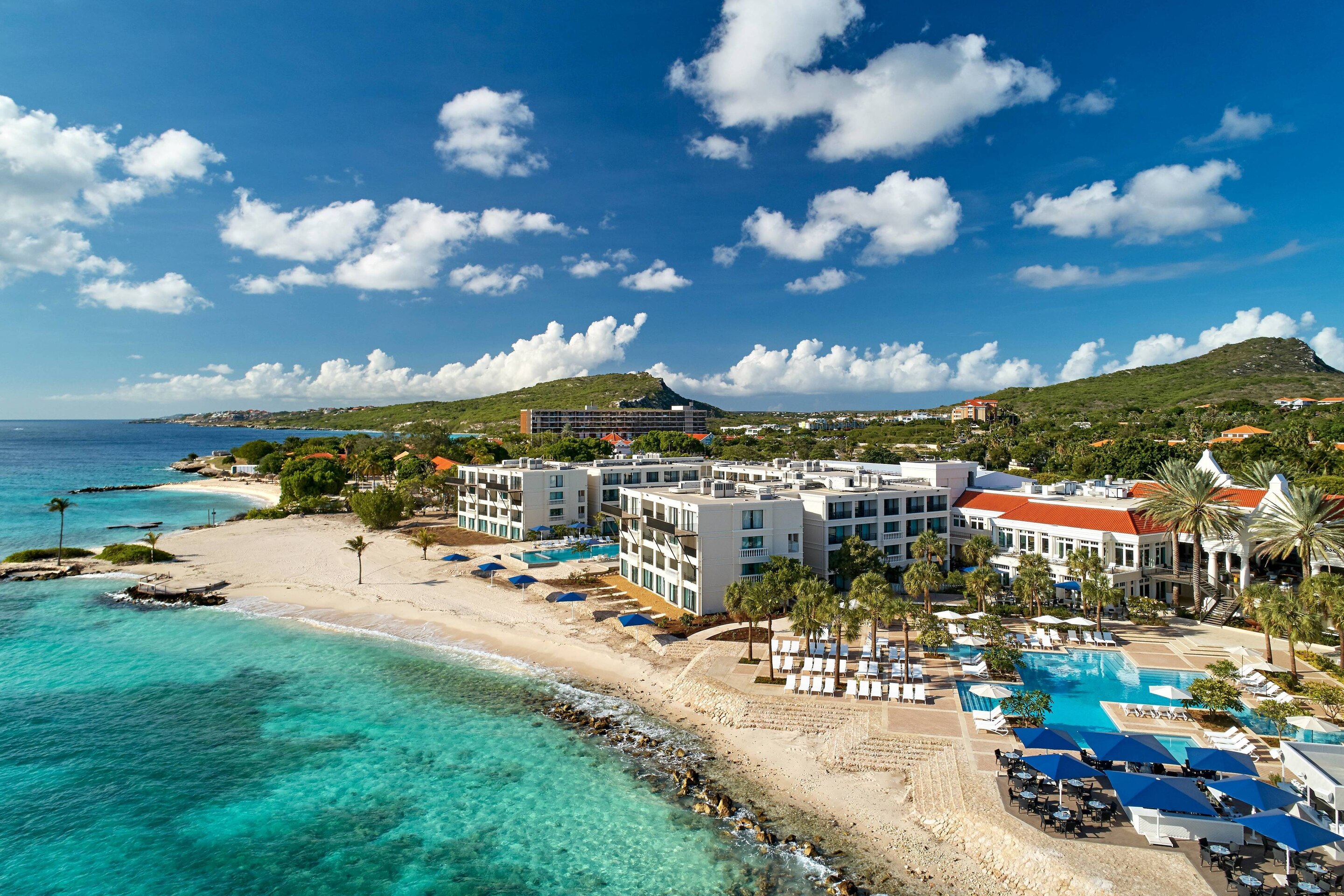 A view of the beaches in Curaçao and the Marriott Beach Resort. Photo courtesy of Marriott.

It can be tricky to get to Curaçao depending on where you're coming from. I had a crazy work schedule during this time and was coming from Europe. Conveniently, the direct flights from Amsterdam made my travel time under 12 hours. For members of my race crew coming from California and Minnesota, the travel time ended up taking about the same or longer.

Upon arrival, I could immediately feel the humidity. It is a very tropical climate with average temps in the high 80's (F) with 80%+ humidity. I did not have many opportunities to train in humidity. I tried to layer extra clothes for a couple runs, and even spent a few sessions in the sauna, which I think helped, but this was definitely not my usual climate. 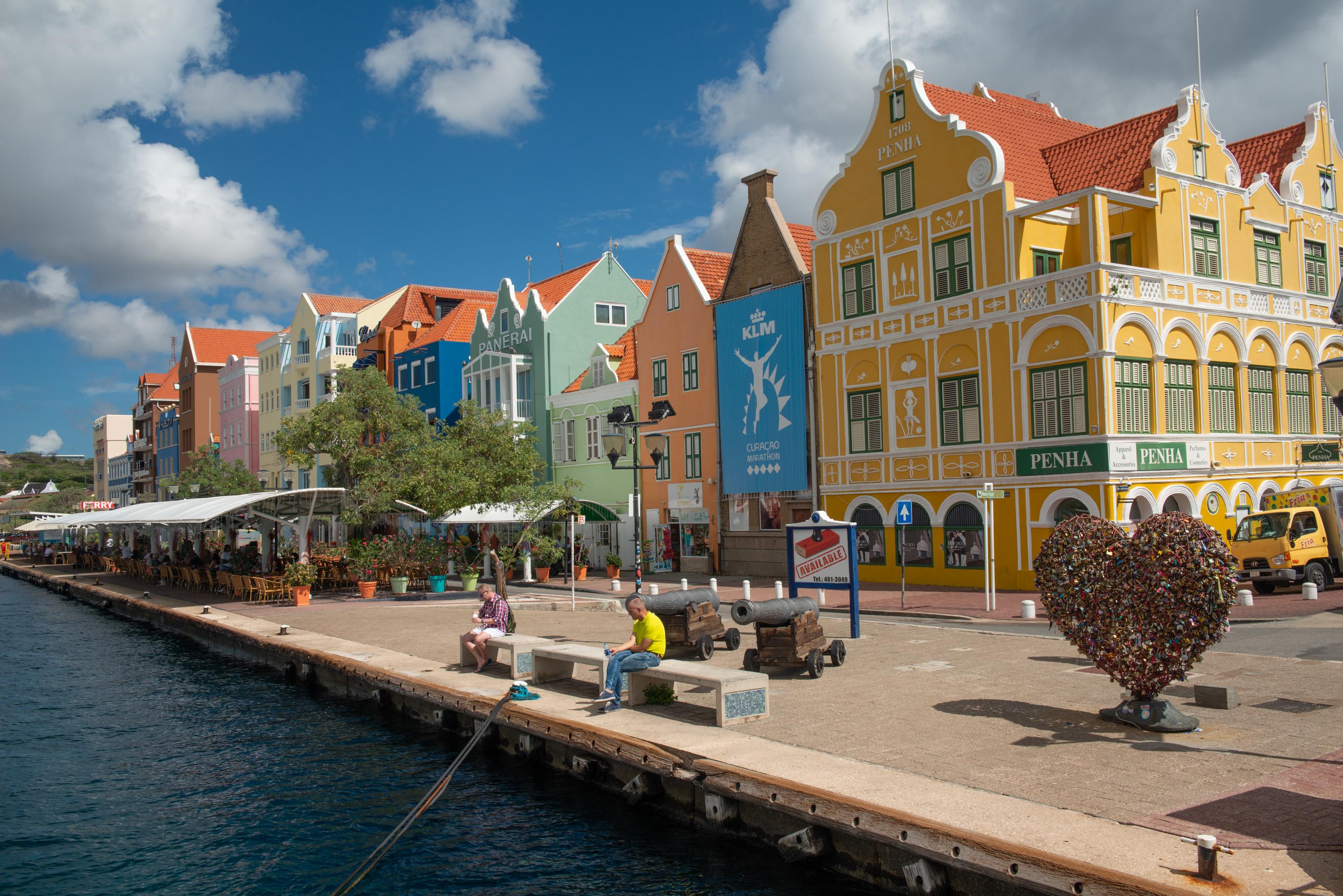 Hanging out in Curaçao before the race

Curaçao is basically a non-pretentious tropical retreat. It's not as luxurious as some places, but also not as crazy or crowded. Since the hotel where I was staying was brand new, the staff was definitely still learning some things, but they were warm and welcoming and very excited about the race and all the guests.

I was lucky enough to have my parents and running buddy+ in Curaçao with me for support, which made the trip extra special and fun.

The night before the race, there was a pre race dinner on the beach. It was incredible. It felt like I was a guest at a wedding. The food was delicious, the sunset was glorious, and my only regret was that I couldn't enjoy a glass of wine and stay out late, as the marathon start time was quickly approaching. 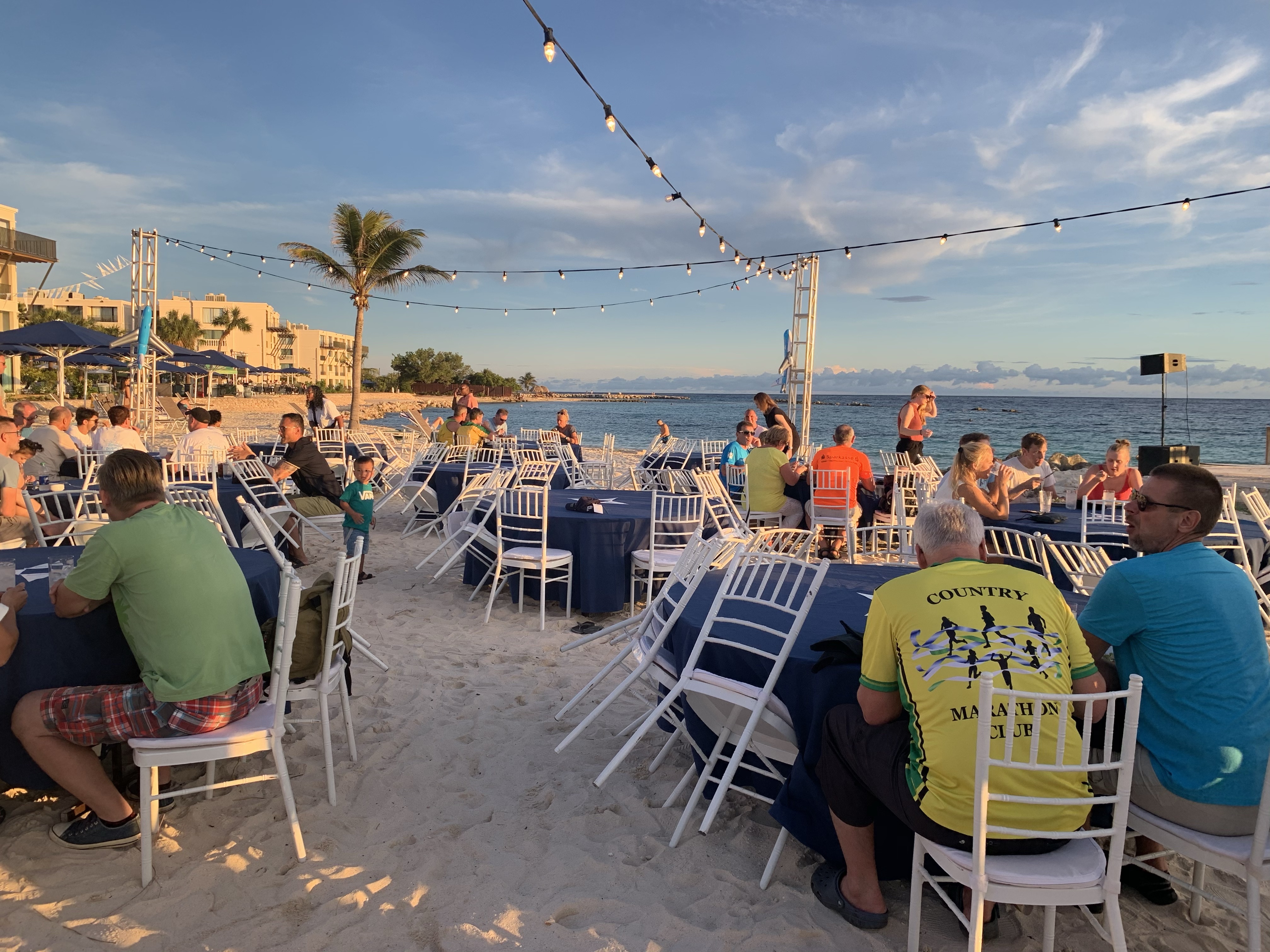 Pre-race dinner on the beach.

The marathon started at an ungodly hour: 3:30am. This meant that most of the race would be in the dark. I was a little worried about this as I did not have a headlamp, but it ended up being well-lit by streetlights throughout the course. Even at 3:30 in the morning, it was 80 degrees and humid.The race organizers and hotel had breakfast options out and it was amazing to be so close to the starting line. I was probably about 200 meters from the start line when I woke up so the logistics were super easy. The course was two loops, with each loop mostly flat aside from one huge hill over a 185 ft tall bridge, the Queen Juliana Bridge. 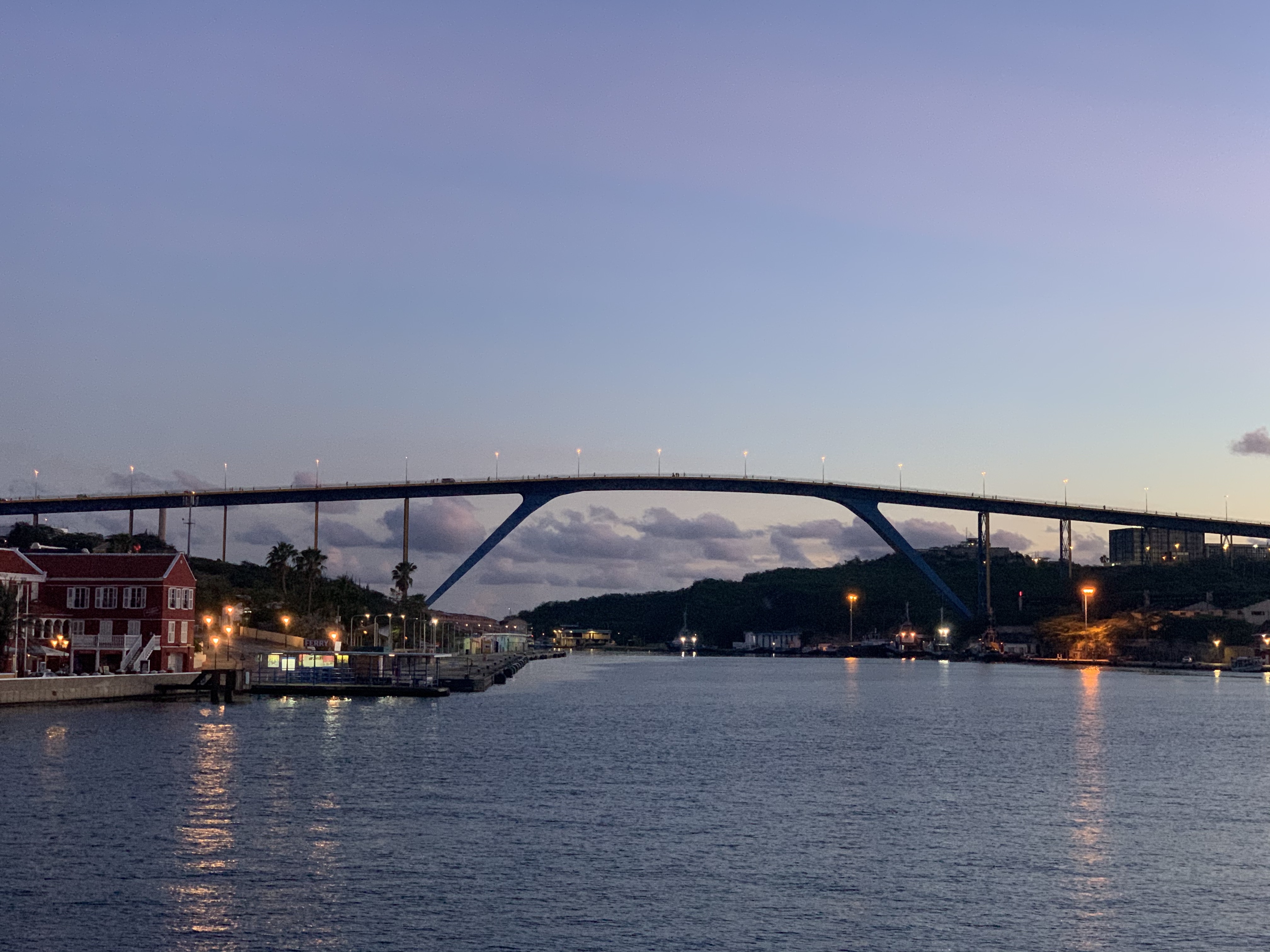 This bridge was no joke to run over.

I started the race a little hot and went out with the lead pack of men. After the first mile split, I eased up and let them go ahead. There were under 200 runners in the race and it spread out fairly quickly so I ended up running most of the race alone. They had a good number of aid stations with lively volunteers. They handed out mini water bottles with squirt tops at each station rather than cups which were amazing as I could just shoot the water into my mouth and carry it easily as I ran. I also dumped as much as I could on my body since the humidity was making it so that my sweat was not helping cool me down.

There were a couple very long straight stretches on the course which felt endless, and there was one time where I briefly made a wrong turn and got chased down by one of the race motorcycles, but aside from that, the course was reasonably well marked and straightforward. The climb up the bridge was torturous and I definitely dreaded the second lap when thinking about going back up. 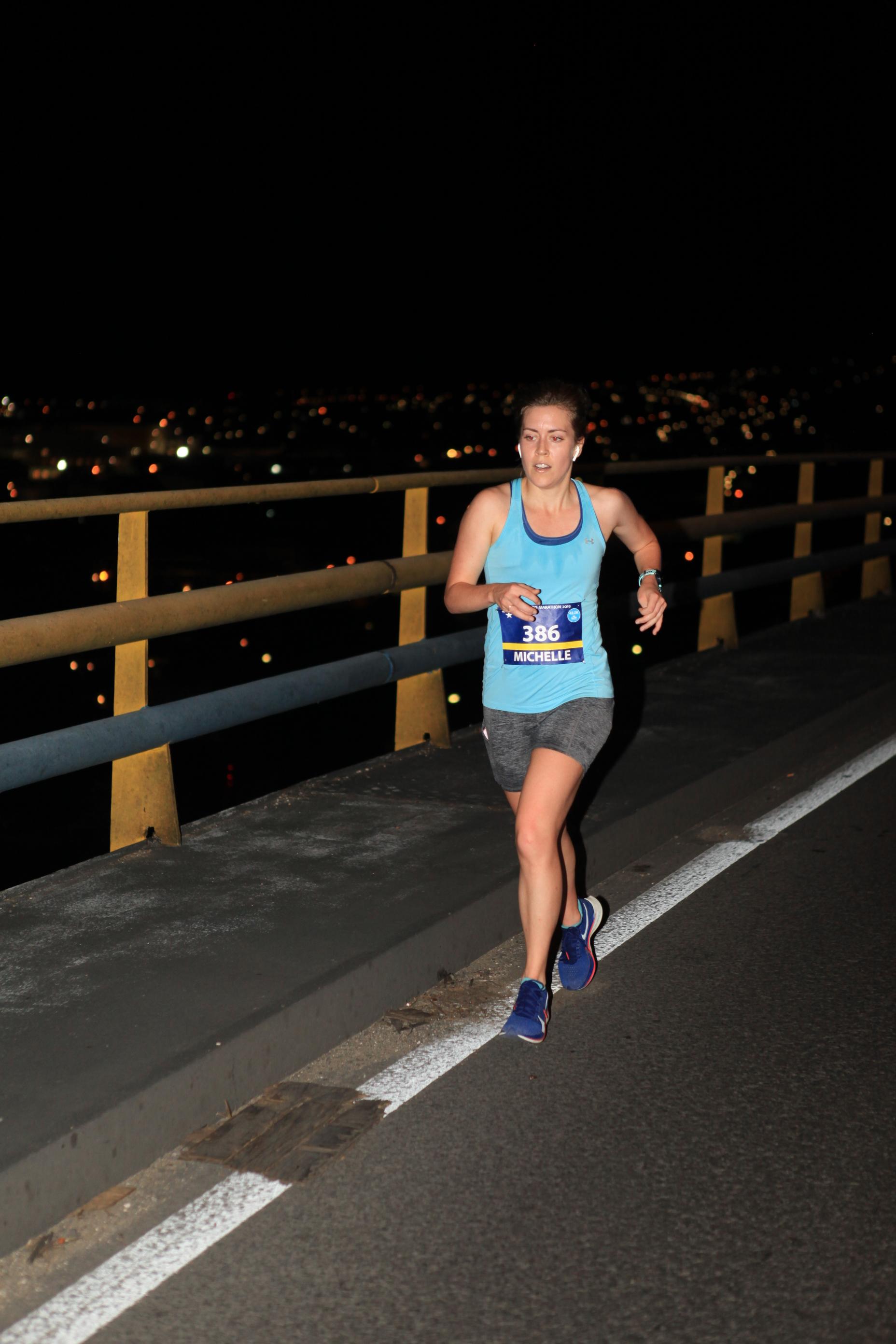 Me running up the bridge on the first loop.

When I finished the first loop, I crossed by the start line and was very tempted to stop and jump right back in to my comfortable hotel bed. I was unsure how well the second lap would go, but the fun part of marathons is surprising yourself when you're feeling tired.

On the second loop, my main goal was to not slow down too much, and to maintain my position as the first woman. There were fortunately some portions of the course where you went out and back so I got to see that I had a reasonable lead. This was reassuring as I was dying the last 6 miles. 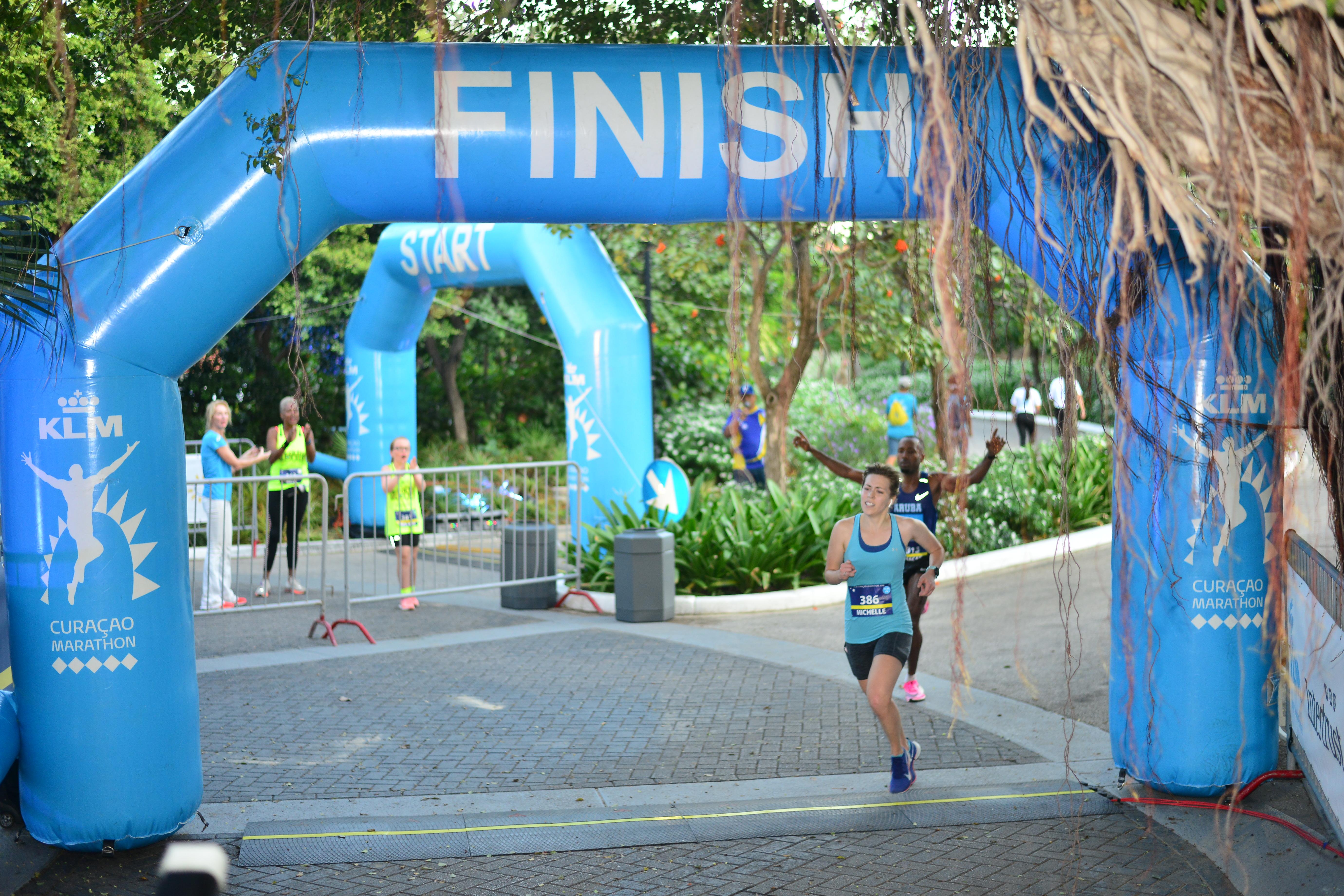 The finish! Barely holding off the half marathon winner.

On the final stretch, the sun was rising and it was a beautiful scene along the ocean. The half marathon leader was rapidly approaching so I strained a bit at the ned to not let him pass me. Once I crossed the line, I was given ice and water, and I promptly sat down to catch my breath.

The real standout of this race was the afterparty. It was hundreds of runners high on endorphins drinking in a hotel pool at 8 in the morning. There were beer tents, a full bar, a live band, and the runners were really getting into it. I had one beer and wanted to pass out at 10am. 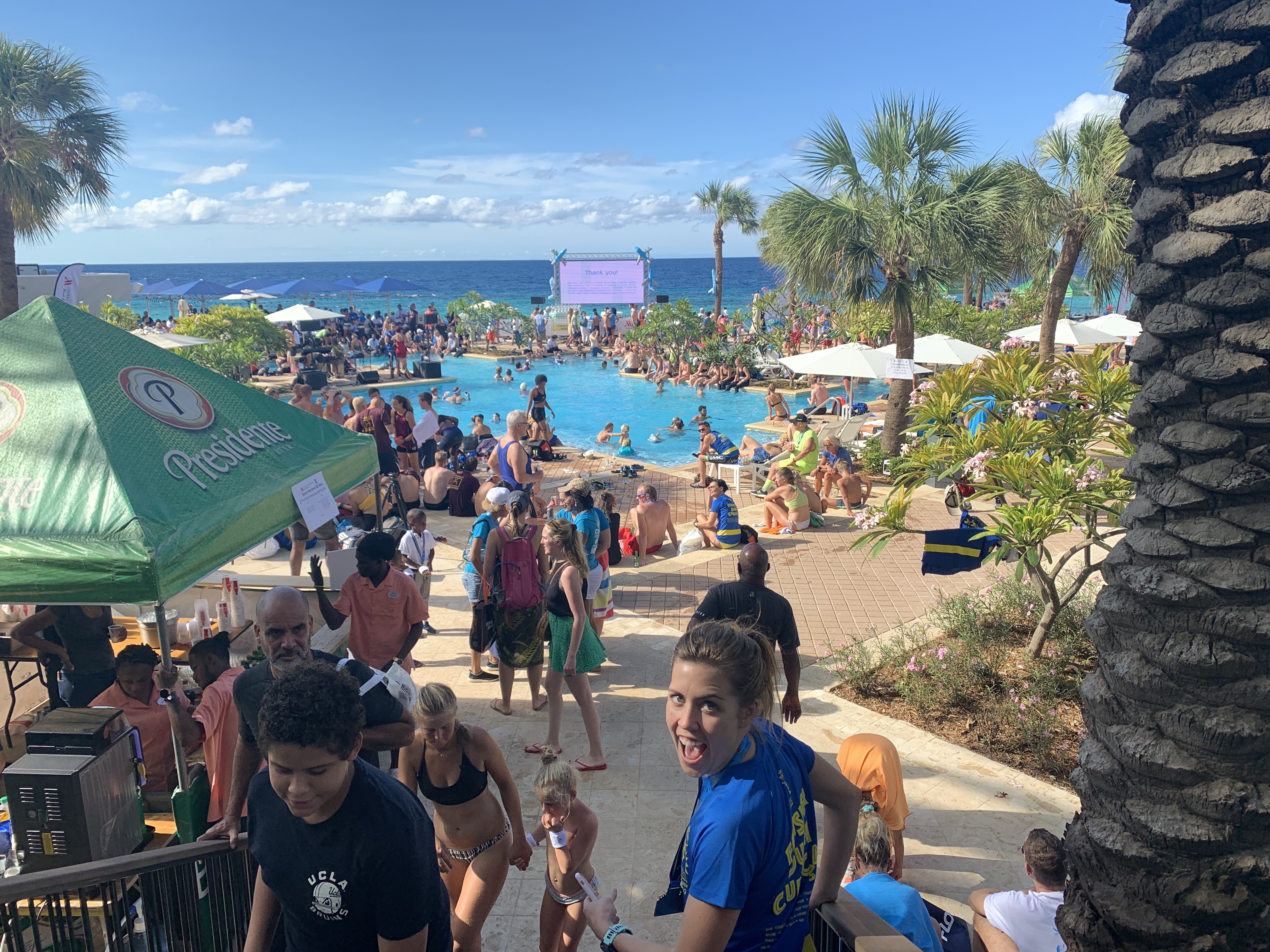 Spring break? Or marathon after party?

The race also had obscene and incredible awards. The top 3 finishers of each race got enormous trophies and got called to stand on a podium. It felt like I had won a huge race. There were also fun lottery awards where some runners won free KLM flights and nights at the Curaçao Marriott.

Loved running the @klm curaçao marathon! Curaçao 🇨🇼 Such a fun atmosphere and amazing hosts! The humidity was real 🥵. But pulled through to take first! Now onto some rest and extra thanksgiving food 🦃 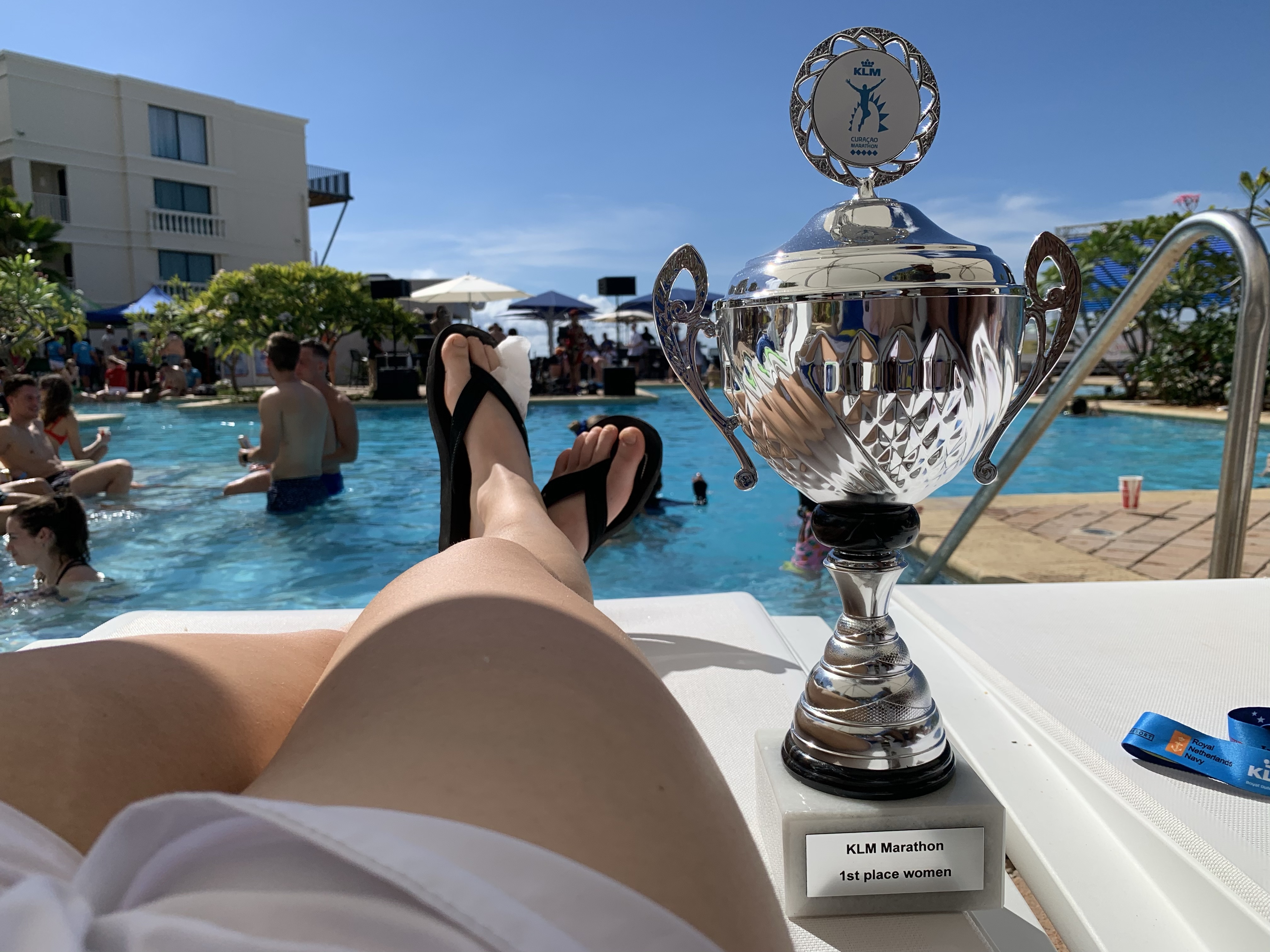 This trophy was hard to fit in my suitcase.

Other things to do in Curaçao

I had an extra day after the race before heading home so I explored the island a bit. While we didn't get to see too much as I was generally a non-adventurous lump, we did go to an incredible restaurant with views of the bridge and the island. We also explored downtown and popped in a few shops.

If you're looking for a small and delightful tropical race experience, check this one out! You can check out their official race website here. 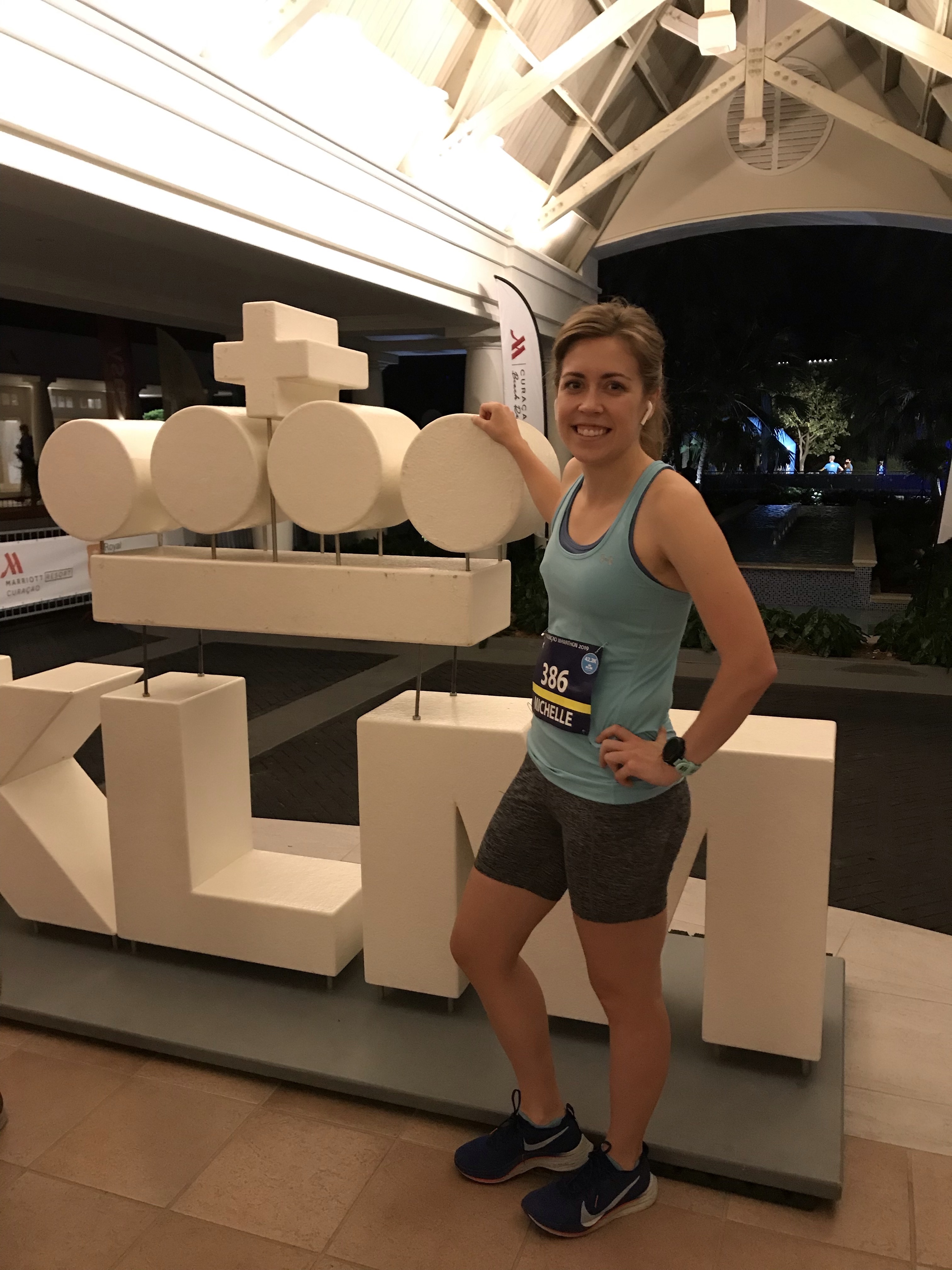 Michelle is an adventure runner trying to run a marathon on all 7 continents.

Thank you! Your submission has been received!

Oops! Something went wrong while submitting the form :(